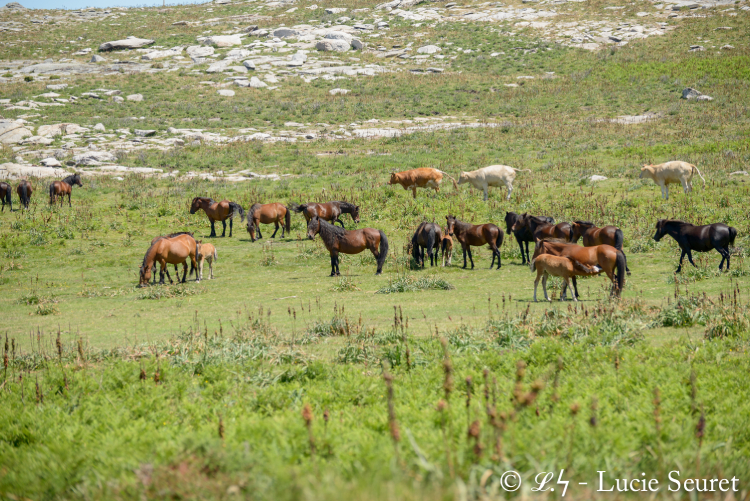 The Garrano is a species of the subgenus Equus caballus L., indigenous to the Iberian Peninsula. On average they stand 1.30m in height and present many similarities with ponies.

The garrano is an Equus Caballus L breed, indigenous to the Iberian Peninsula, standing on average 1.30m in height, and shares many similarities with ponies. It originated in the Iberian mountains, from the Atlantic to the Prynne, and was quite different from other breeds in the Palaeolithic era. During the middle Palaeolithic, climate changes, namely the most recent ice age (Wurm glacial) which ended circa 10,000 year ago, almost completely covered the European continent, forcing fauna and vegetal species to migrate to southern latitudes where climate conditions were more favourable. The ponies from northern Europe originated from horses that migrated due to climate conditions, influences by the movement of the glaciers. Only the highest ranges in the Iberian Peninsula were affected by the glacier, namely Gerês, Serra da Estrela, and the Cantabrian and Asturian-Leonese mountains. As such, it was possible that a group of horses settled the Iberian Peninsula. The current garrano horse has its origins in these pre-historic horses. The garrano is the oldest breed among other similar horses in the north of the Iberian Peninsula, more specifically the Galician mountain horse, the Asturcon from the Asturias and the Pottrok from the Basque Country.

Currently the garrano roams freely in the mountainous regions of the Minho and Trás-dos-Montes with a large group in the Peneda Gerês National Park, Serra de Arga, and in Serra de Santa Luzia, grazing in common land areas. The garrano has been closely linked to the rural communities of the Minho, their life style, traditions and history. Due to their strength, hardiness, stamina and gentile manner, the garrano is fully apt for agricultural work, for ploughing small fields as well as for the transportation of people and goods along the steep and winding roads of the mountains.

There came a time when laws were passed to force people to breed larger breeds but in 1490, in the Cortes de Evora, the farmers from the Minho region obtained permission from the king D. João II to breed garrano mares. The garranos also boarded the caravels from the fifteen-hundreds, serving as transport and hauling animals, in the discovery of new worlds, cross-breeding giving rise to new horse breeds in Mexico (Galiceno) and Brazil (Criollo). They were used as transport animals by the Portuguese armed forces in various campaigns and were also used to carry ore from the remotest mines in the mountains of northern Portugal during the Second World War. Rock art, references in documents dating back to the Romanization period and various legends narrating the foundation of a nation include the garrano, bearing witness to the important role the garrano had in the north of Portugal, especially following the repopulation program for the region during the reign of D. Dinis. Due to the abandonment of certain agricultural practices and the mechanization of others, the need for the garrano slowly declined but the breed has been progressively appreciated due to its potential value for tourism and its ethnographic significance, inspiring regional folklore with trotting races at traditional markets.

The current standard for the breed is as follows:

Height: measured at the withers in adult animals (3 years for females and 4 years for males). Maximum allowed: 1.35m

Colours and Markings: Chestnut with a tendency for dark colours without markings. Chest is deep and wide. Black thick mane and tail.

Temperament: well-mannered, easy going and alert. It is a pack horse, resistant and willing to learn.

Gait: general easy, rapid, minimal but high movement of legs. They have a firm walk in mountainous areas while ascending and descending and are careful with rocks and other obstacles.

*The horse balances itself and two feet move forward simultaneously, the advancing rear hoof oversteps the spot where the previously advancing front hoof touched the ground. This is a slow walk.

**Horse lifts and moves each foot separately to produce a four-beat gait, each step being heard separately. One, two, three, four.

Head is small but can be heavy with a straight or slightly concave profile. Eyes are large and lively. Large nostrils. Average ears. Normal teeth with muscular and strong mouth.

Neck: Muscular but short and thick especially in stallions.

Withers: low but distinguishable with a soft transition between neck and back.

Croup: Strong, rounded and large with a tendency to be horizontal with identical width and length.

Back: short and straight

Loin: muscular, a bit convex with a smooth transition to back and croup.